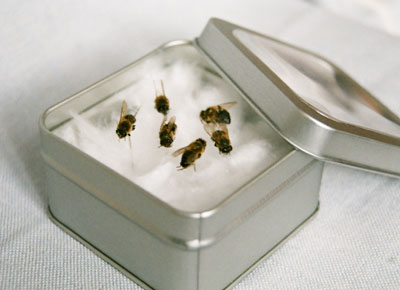 These bees were murdered.

Foul Play is an installation including six, boxed honeybees and an accompanying audio. It draws a comparison between the death of these bees and a fairytale by the Brothers Grimm about human empowerment.

A colleague at work told me one day that the two hives she kept on her allotment had both suddenly died. Every bee was dead. At the time I’d been trying to gather honeybees for a project so I asked her to bring some in for me. There are problems with bees in the UK at the moment and some predict widespread failure of our ecosystem because of these problems. So my colleague called in a bee expert to visit her hives and find out the cause of death. In this case, it was simple – the bees had been poisoned.

Who are the suspects? Who would poison a hive of bees? Perhaps someone on the allotment who was scared of being stung, or someone elsewhere who unknowingly poisoned both hives by spraying just a single bee.

This incident reminded me of a story by the Brothers Grimm called ‘The Brave Little Tailor’. The tailor is a small man, insignificant in society and with no great knowledge, but one day he is emboldened by swatting a group of flies. This small feat leads him on to battle giants and, ultimately, to win the hand of the princess of his kingdom. A happy ending.

For a child it’s a wonderful tale of the weak beating the strong. But I wonder now, as an adult, if we are a little too emboldened by our achievements.

Poisoning is sometimes known as ‘the intimate murder’. You have to get close to your victim, but it seems less violent too. It is a cowardly murder in some ways.

Foul Play was commissioned by Cecilia Wee as part of 30, a collection for a private residence.