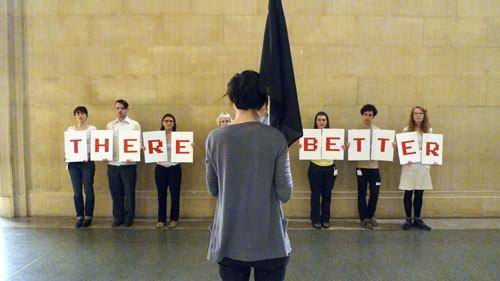 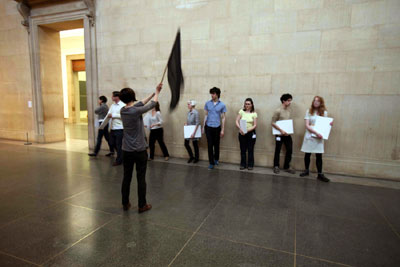 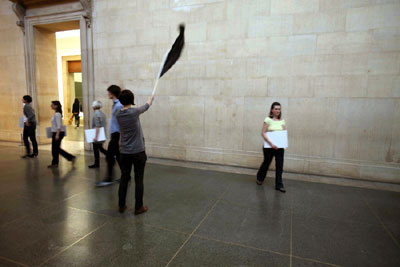 In this promenade performance, a set of performers carry signs that together spell out words. They roam around a crowded space, find a good spot to display, then fan out with their message. The message alternates between ‘HERE IS BETTER’ and ‘THERE IS BETTER’. They are constantly pursued by a flag-bearer. The performers hold their message until the woman waves her black flag – this is their cue to fold up their signs and disperse back into the crowd. This work ideally plays for several hours in the background of a crowded space so the performers weave through their audience and display the messages at regular intervals.

The source material for this work is a newspaper article which describes the relationship between Cuba and the US. The US government displayed irritating messages on a giant news ticker in Havana, and in return Castro erected 100-foot-high black flags to block these messages. In Here Nor There, there is a meaningless dialogue between the two sides (the sign-holders on one side, the flag-bearer on the other), and even the message is ambiguous – as if both sides have lost the point of their exchange. The work pokes fun at diplomatic tit-for-tat and how actions lose their meaning when two opposing sides are entrenched in conflict.