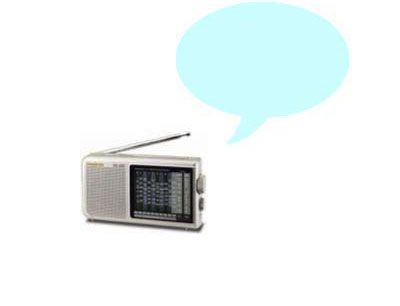 You imagine the sea as a cube with six sides; five of these sides are coated in a limitless blue, stretching far into the distance. One wall of blue is followed by another and another, each one a little darker until they fade to indiscernible night. You are at the centre of this cube and the walls of the room in which you stand form the first, palest, wall…

An analogue radio on a small table is tuned into a particular frequency. Broadcast by radio transmitter, a woman’s voice, played on a loop, reads a text.

The text conveys a sense of imminent change. It draws on a newspaper article about treatment for the bends, and drifts from reported fact into fantasy. The article is re-presented, adapted and broadcast through a different type of news media (from a newspaper to a radio). An implicit theme of the article, water, becomes a threatening presence in the adapted text.